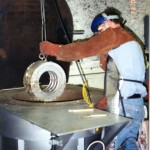 A prepared babbitt bearing shell is being lowered into a molten tinning bath furnace. 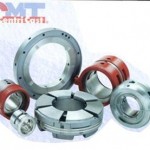 Babbitt bearings are important to all heavy industrial machinery because they are used for high speed, rotating equipment, such as compressors, turbines, electric motors, large power generators (like those in power plants).

Babbitt bearings are sleeve bearings made of certain types of alloys, which are melted down and cast to produce the bearing surface.

Babbitt bearings are made in a few simple steps:
1. Bearing shells are restored by melting out the original Babbitt material. The grit is blasted from the shells. The bearing shells are inspected and immersed in a 100% molten tin bath to assure a good bond for the new Babbitt.

2. The prepared shell is placed into the casting machine prior to spinning.

3. Special machines are used to spin-cast bearings. These machines employ bottom draw pouring furnaces and inert gas pressurization of the cavity being cast. This guarantees an oxidation free environment for molten metal.

4. When the centrifugal casting process is used, all virgin Babbitt is securely suspended on the walls of the shell, which yields a completely void-free casting and superior grain structure for extended wear and reliability.

5. After the bearings are cast, they are proof-machined and ultrasonically inspected for bond integrity.