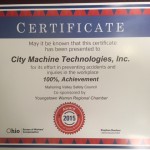 The 10th annual Mahoning Valley Safety Council Safety Awards dinner was held on Wednesday and celebrated those companies who keep our community and its employees safe throughout the year. A host of area businesses won 141 awards. CMT won three awards.

The 100% award was given to CMT and other companies who had no lost time claims in 2015.

The Achievement award was given to CMT and other companies who decreased their workers’ compensation injury incidents by 25 percent or more in 2015.

CMT was also awarded the Spirit of Safety Award in recognition of their continued support of the Mahoning Valley Safety Council.

The Joan Kovach Safety Leadership Award was presented to Magna Seating in Lordstown for their safe worksite and work practices. The leadership award is named after Joan Kovach, who with her husband Michael started CMT in 1985. She died in a hiking accident in 2006 shortly after the Mahoning Valley Safety Council was created. Joanie was a steering committee member.