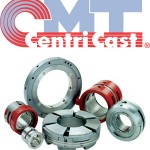 City Machine Technologies, Inc. has specialized in this industry and performs all services in-house under the trade name CMT CentriCast. We have perfected the centrifugal casting of all sizes of Babbitt bearings. All Babbitt used is virgin ASTM B23-49 Grade 2 tin-based metal with certification.