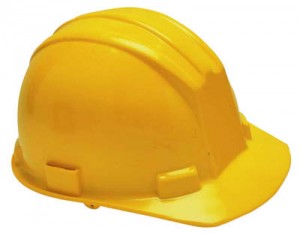 Workplaces like construction and industrial sites require hard hats to protect employees’ and visitors’ heads from falling objects. Suspension bands inside the helmet spread the helmet’s weight and force of any impact over the top of the head for additional protection. Hard hats are common place in industrial environments, but did you ever wonder how they came to be?

Workers in the ship building industry covered their hats with tar and set in the sun to cure to protect their heads from falling objects.

As far back as 1898, E.D. Bullard Company sold protective hats made out of leather in the U.S. That same year, the U.S. Navy commissioned Bullard to make a protective hat for the shipyard industry. This began the widespread use of hard hats.

E.W. Bullard, a son of E.D. Bullard, returned home from World War I with a steel helmet and ideas on how to improve safety.

In 1919, Bullard patented what he called a “hard-boiled hat” made from steamed canvas, glue and black paint. Bullard is also credited for designing the internal suspension bands used in hard hats.

In 1931 while the Hoover Dam was being built, hard hat use was mandated. And in 1933, the Golden Gate Bridge construction workers were required to wear hard hats. As they say, the rest is history.

Fun  fact: Hard hats were made out of tar, leather, aluminum, fiberglass, thermoplastic and currently are made with high-density polyethylene (HDPE).